I wish that cancer was just a word or a scary story….

One never knows who we’ll meet traveling through life. I want to highlight someone I am privileged to know for the most wrong reason imaginable.

I met Adam Tolley due to what must be the most horrific thing one could face: cancer. I have the utmost respect for this young man. He is riding in a well established bicycle ride fundraiser (www.pelotonia.org) to raise funds to help fight cancer. He is doing so in remembrance of his younger brother, Andrew.

Adam also chooses to focus on a few others affected by cancer and has been kind enough to include me over the past few years. I am honored beyond words.

In preparation for the grueling bike ride this year, he decided to mark up his legs with some names. Read each carefully folks, this is not child’s play. 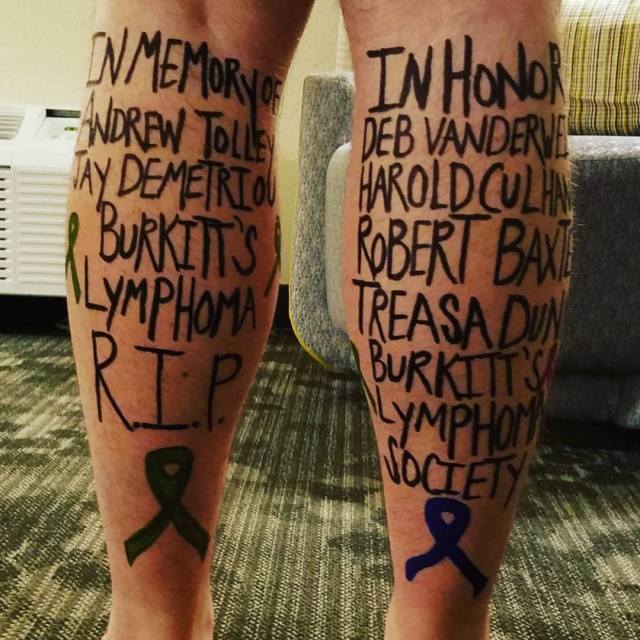 I am a member of the Burkitt’s Lymphoma Society. Adam joined the group after his younger brother Andrew was diagnosed with Burkitt’s. Not only did Adam join, but his mom, Andrew’s sister, and also Andrew joined. Not often our group has seen young teenagers join our group, much less the whole family.

Andrew Tolley was a bundle of life, known for his humor, smile, and quick wit. We all wept when Andrew passed exactly one year from the day of his diagnosis at the age of 15. I just cannot fathom such pain. As of this writing today, Andrew would be 20 years old. 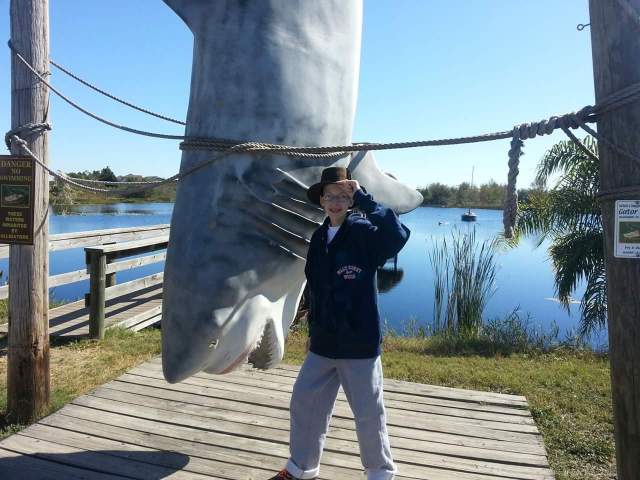 Andrew’s mom shares he was so sick with chemotherapy and Burkitt’s Lymphoma when this photo was taken. It is her all time favorite pic. Andrew let nothing slow him down and his radiant personality shines forth clearly right in the midst of fighting for his life. I absolutely love that this picture proves that cancer CANNOT stop the zest for life we all carry deep in our souls.

Andrew wrote something in the privacy of the Burkitt’s group. I was floored when I read it then. I am still shaken deeply when I read it now. Andrew was really fighting at this point. I marvel at the wisdom and insight from a brilliant 15 year old teenager as he battled this absolutely shitty cancer.

Everyday I wake up and try to put a smile on my face but it’s so hard to look towards the future positively. I know that is not how I should be thinking right know but sometimes in those hard times when I’m at my lowest point that’s the only way I can think. I do however try not to look negatively toward the future for fear that’s what will happen so I try to look positively toward the future even in the hardest time. It’s so hard just to sit and listen to your family say that they wish that there was something they could do but at times all they can do is sit and watch. If someone in my family told me there was a way that they could take my spot I would tell them no. The main reason why I would tell them no is because I don’t think I could handle watching someone else in my family go through what I have to go through. It is hard enough for me to go through it and I don’t want anyone else in my family to go through what I have to go through. I don’t know if that’s selfish but that’s how I feel. In a way I’m glad that all this is happening to me and not someone that isn’t as strong as I am. It’s not fair how the world works I wish that cancer was just a word or a scary story that people told at camp to scare the campers.

(bolding and italics mine for emphasis)

Truth be told, I cry every time I read this. I have copied this paragraph to my phone. I did so when Andrew first wrote this. I was blown away at the selflessness and maturity of such a young soul fighting for his life.

It is NOT fair how the world works people, it is not.

Adam, Andrew’s older brother, has had his share of grief and personal demons from losing his younger brother. I have watched and communicated a touch with him, encouraging him to keep trying. Adam is channeling his grief and focusing his life on certain things, things that are helping him to make it to the next day.

You see, I don’t believe success is success because we ride a bike to raise funds, as admirable as this is. Adam, just like his mom and sister, are successful because they chose to face another day carrying a hole in their hearts they should not have to carry. They get up and face a world that is not fair and choose to honor Andrew with their lives in their own ways.

Adam is countering his pain with an intense bike ride that gives 100% of every dollar raised to help fight cancer.

Check out this 30 second video (click this highlighted sentence) that Huntington Bank made for Adam as he rode in last year’s Pelotonia fundraiser.

I wish that cancer was just a word or a scary story that people told at camp to scare the campers.

Would you say a prayer for the Tolley family? 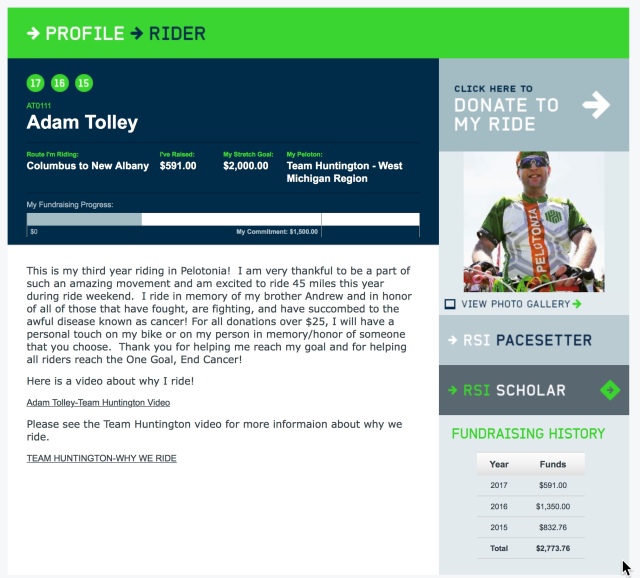 If you have an extra $5 bill laying around for a burger, would you consider donating to Adam for this ride?

2 Responses to I wish that cancer was just a word or a scary story….