I was admitted to room 728 in Harris Methodist, Fort Worth Texas, Thursday July 24th. This is my second round of chemo. I anticipate a minimum of 6 rounds, possibly 8. The goal is remission, then move to a stem cell transplant.

The admission went well. The nurses are super kind. I’ve noticed over my career that the area one works in brings out a certain style of nursing. Oncology is noted for kindness, sympathy, sweetness, a desire to make the patient happy at all cost, and a fairly meticulous approach to each interaction with the patient. I witnessed that in 2008 and now again in 2014. I love oncology nurses. I considered trying it out myself after 2008, but wasn’t sure I would be able to handle it emotionally. Hits a little too close to home.

I discovered the nurses haven’t seen many “double lumen” ports. My central line, or port, is buried under the skin. It is not visible to the naked eye. Some central lines come out of the chest and the tubes are visible. Mine isn’t. Double lumen means two individual ports with their own separate tubes bundled so that it is one package with two channels. Think of an interstate with busy traffic flow. Although it is one interstate, it is separated by a strong cement barrier to allow two independent flows of traffic. Functionally two independent flows yet operates and built as one unit.

Each channel has to be accessed independently. Put another way, two sharp long needles, one for each channel/lumen. The nurses here haven’t seen too many double lumen ports. It isn’t obvious to the naked eye. I didn’t think to mention it, assuming they knew. My mistake. So they accessed one port, it flushed well (yummy tasty preservatives in the saline), but it wouldn’t draw back for blood return. 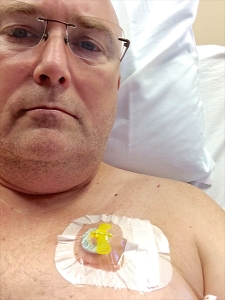 It wouldn’t return blood, so they couldn’t start chemo

I mentioned accessing the other. … silence. “You have a double lumen?” Yep. “o.k.” Innocent misstep as she would have brought the equipment to access both ports simultaneously.

Since the port wouldn’t return blood, it couldn’t be used as is. Thus began a process of accessing both ports, instilling various medications to open up the channels to allow blood flow to come backwards for blood draws. The “big gun” of medications is named, in short, “TPA.” Think of a liquid roto-rooter gel you put in your drain to unclog it. Obviously very different chemical structure, yet the same basic goal: eat away at whatever is impeding the flow to improve the flow.

Here comes change of shift. The night nurse walks in, tries the ports out, and they not only continue to allow easy flow of saline (yummy!) into my body, but walla! The blood is now being pulled back out. This was before they instilled the big gun: TPA. Instant relief as we can now continue this process and get it over with.

This is the second pic I took. The first one, I didn’t smile. She gave me a look and asked “why didn’t you smile?” Being married many years, I said “yes ma’am,” smiled, snapped another, and peace was kept.

Here comes the drugs. Benadryl: 25mg IV, Decadron (steroid!): 10mg tablet, Solumedrol: 20mg IV (another steroid!), Prednisone: 60mg (we got into a focused conversation on the need for this one and cooler heads prevailed, no need for 3 steroids all at once, so this was ultimately held to my satisfaction.) Then comes Xanax: 0.25mg to counter some of the steroid hyper effects,  Tylenol: 650mg (has no effect on me, might as well drink water), and then we wait while all these premeds take effect.

Then the start of chemo. I’m getting drowsy, shut the computer down, turn over to my side, and fall asleep while they begin Rituxan: 750 mg IV. Powerful stuff.

Has a half life of 22 days. Powerful stuff

I awaken about 2am. By 5am, I’m working on pictures, this blog, drinking coffee, and the Rituxan is done. Now begins three days (I think) of the red devil. She suggests I take a quick shower before the three day continuous infusion begins. Done. Feel much better.

I’m waiting for breakfast to arrive. Enjoying this moment where sickness hasn’t begun yet. I’m sitting next to the window. The sun is rising. All is well. I’ve submitted to the process for round two.

4 Responses to Submitting to Round #2