I have the coolest job in the world. Seriously. I get to work with some of humanities most frail tiny people. I work as an RN in a neonatal ICU in a large hospital in Fort Worth, Tx. Basically this means I work with (mostly) little babies who are either born early -or- are weak for some medical reason. We take someone who is fragile and turn them into big healthy bouncy babies ready to go out the door.

I first started as an RN in 1990 at Texas Children’s Hospital in Houston, TX. I initially was interested in the pediatric ICU, but found that wasn’t a job fit for me coming right out of nursing school with no experience. After 14 weeks in the PICU, I wanted out. They wanted me out too. I was miserable. I asked if I could stay with Texas Children’s Hospital, but go to another area. They put me in the NICU. I felt defeated, yet glad to have a job.

I walked in that first shift and I will never forget that moment. I didn’t know such a place existed, having gone to nursing school in a smaller West Texas town. I recall seeing the little babies swaddled and the mom’s sitting around. I had this distinct and clear thought go through my head: “I’ll lick my wounds for a few months, then go get a real job that a man does.” Seriously. I saw no men around and had ZERO desire to work with babies. I can’t say I had been around many infants up until that point. I was married by then for 3 years, but we had no children.

It didn’t take but one week to win my heart over. I remember the exact moment, the location, and the baby. I was holding this rather handsome little fella and my heart just melted. He was a miniature version of a large person. He was weak, helpless, cute as could be, and made these innocent sweet noises. I felt arising within my soul a strong sense of paternal protection, something I hadn’t experienced prior to that moment.

I decided that maybe this wasn’t too bad and I could stay for just a short while before I go out to explore whatever it is that men do as an RN. That ‘little while’ turned into six years at Texas Children’s Hospital in the NICU. I had found my niche! I have worked in other areas of nursing in my 26 years, but the NICU is where my heart is and where I’ve worked the longest overall.

I have a story I would like to share with you to give you an idea of what I do. Not only will I be sharing a bit about my profession, but also about my heart and something valuable I have learned out of this second cancer battle. I share the following with permission and encouragement from the parents. They sent me great pictures and all manner of details.

Elizabeth and Mattie, twin girls born in 2014, came to our NICU weak, frail, and fighting for their lives. Their situation up until birth had been rough, one twin was essentially ‘stealing’ blood from the other while growing in the uterus. This is called a twin to twin transfusion. The powers that be took appropriate measures to stop the baby to baby blood transfusion using the best technology available. Not long after, the twins decided they wanted to enter into our world. 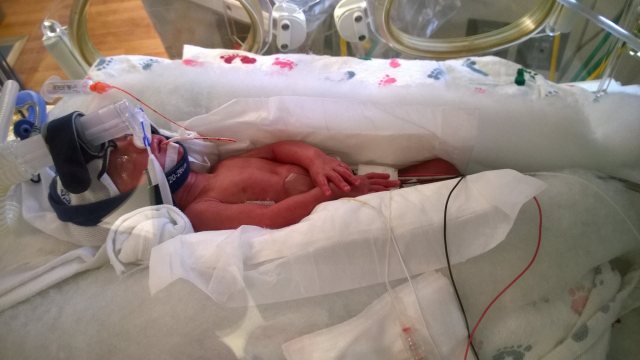 Their course in the NICU was long and complicated. I could describe in details the medical interventions and what happened, but suffice it to say that protecting their brain function, lung function, bowel function, and other body systems is not easy to do when they should still be in the oven cooking to maturity. Put simply, all these precious organs are not ready for the real world and are essentially forced (coaxed?) into doing a job they are not mature enough to do without risk of problems. Considering we have no other options, we do our best to place the babies in the most supportive environment we can.

Their story is a testimony of how good medicine, when combined with prayer and compassion, can work miracles. Both made progress and had setbacks. Some of the setbacks were significant. Elizabeth was in the NICU 121 days, and Mattie was in 147 days.

I had the privilege of taking care of at least one of them on mother’s day 2014. This would have been shortly before my diagnosis  with Burkitt’s Lymphoma June of 2014.

We have this cool option for parents to view their babies through video cameras. I sometimes put little thoughts, “crib notes,” inside the isolette for the family to enjoy. On mother’s day, I put “crib notes” in the bed of the twin I was caring for.

I decided to share this story for several reasons. First off, I’ve always wanted to bring my friends and family into a better knowledge of what I do for a living. Secondly, connections are made and hearts knit together during difficult times in life. Not only was I able to ‘be there’ for Christopher and Amy (the parents) as I cared for one or both of their daughters, but they had an opportunity to turn around and bless my socks off. I never appreciated the small things in life we do can do to build up one another. Allow me to share.

When I left work June 2014 due to finding a knot on my neck while at work one night, I had no idea the changes about to hit me head on. I also had no idea how much impact we can all have on one another. Not only did I have the privilege of caring for Elizabeth and Mattie, their parents had a chance to bless me and my family. They took great concern over my diagnosis and helped to generate significant prayer on my behalf.

Amy posted to her family and friends the following on September 3rd, 2014:

As you pray today, I’d appreciate an extra prayer for Robert. Robert is one of the girls’ nurses and is fighting his own battle with cancer. He is such an incredibly thoughtful and loving man. He made my Mother’s Day by leaving this note.

The note she refers to were the ‘crib notes’ I had put inside the isollette for her on mother’s day 2014.

Fast forward to mother’s day 2016. Amy posts the above picture with the “crib notes” to my timeline. I had forgotten about doing that. What a joy it is to see how something as simple as a few scribblings on paper meant so much to Christopher and Amy. I tell you what, you really do not know the impact you have on another . We should value the opportunity we have to encourage and benefit one another daily.

What about Elizabeth and Mattie today? As long and difficult as the NICU course has been for the twins, their battles continue on some level or another after discharge though they are doing really great overall. Entering the picture are such things as AFO’s (just learned that one myself), ankle foot orthotics. Elizabeth has been wearing them since March and is walking well. Aren’t these little tootsies cute?

Want to see some uber cute photos of the girls? Here ya go!

Aren’t they gorgeous? Just stunning little miracles. I tell you what, you never do know the impact you can have on another person. I thought I was ‘simply doing my job’ (which I was), yet my impact on this family left enough of an impression they felt compelled to say and do nice things for me in my time of distress. They turned around and blessed me with concern, love, and prayer support when I was so fragile and dearly needed every ounce of support I and my family could receive.

Special thanks to Christopher and Amy for allowing me to share this part of my life with my family and friends. I’ve always wanted to share more and haven’t made it a point to do so until now. I’ve got a few other cute NICU baby stories I will get around to sharing, but need to get written permission from the parents first and wait for that key moment when I feel led to share.

This is the greatest commandment in action people.